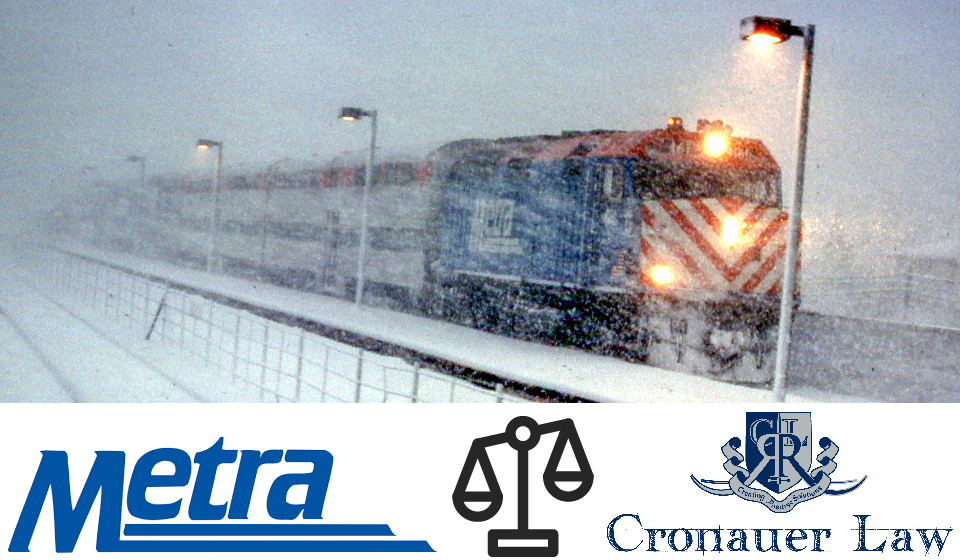 Ex-Metra engineer gets $5.3M after slip

Ex-Metra engineer gets $5.3M after slip​

A Cook County jury on Tuesday awarded $5.3 million to a man who needed a spinal fusion after slipping on snow and ice while wearing an oily boot.

Plaintiff Christopher Cravatta, a locomotive engineer for Metra, sued the rail agency in 2014, alleging it allowed him to use an unsafe engine that had oil pooling on its floor, which led, along with the ice and snow, to his slip in December 2013.

Cravatta, who was 30 years old at the time, was transferring a train from Metra’s Western Avenue Coach Yard to Union Station at the time of the incident.

After his arrival, and as he was walking through the locomotive’s engine room, oil that had pooled on the floor adhered to the soles of his work boots.

“That gets on the bottom of their shoes or their boots, and it makes them slippery,”

said Brett A. Emison, a partner at Langdon & Emison in Kansas City, Mo., who represented Cravatta.

Cravatta walked through the engine room to reach the passenger car coupled behind it. That was a 17-inch step down, Emison said, and his foot came down on a patch of snow and ice that was packed on the outside vestibule area.

The combination of oily boot soles and the winter elements caused him to slip and injure his back, Emison said.

He didn’t know the extent of his injuries at first, Emison said, and his body was not responding to the conservative treatment physicians were trying on his back.

Cravatta was eventually diagnosed with a tear to the annulus — which Emison described as a vertebra’s “shock-absorber” — and underwent a procedure in October 2014 in which physicians removed a disk and performed a spinal fusion on his lower back. But the back surgery was unsuccessful in treating his back pain, which Emison said happens to about 30 percent of patients who undergo a fusion procedure. Because of the surgery’s ineffectiveness, he said, Cravatta still takes pain medication and is unable to work.

“It doesn’t mean anybody did anything wrong. Sometimes, instead of helping things, it makes things worse,” he said. “There’s one or two more things he can try, but for the most part this is probably what he’s going to have to live with.”

Metra denied the allegations in Cravatta’s suit, instead contending he lacked any evidence that oil contributed to the incident.

During trial, the plaintiff presented evidence of about 200 written complaints to Metra regarding oil and lubricant residue build-up.

But those complaints, which date back to 2008, largely regarded other locomotives than the one at issue on different days than the date of Cravatta’s incident, said Michael E. Kujawa, a partner at Schain, Banks, Kenny & Schwartz Ltd. Kujawa represented Metra.

The complaints contained some relating to the locomotive at issue, he said, but the most recent complaint came nearly three months before the alleged incident. Kujawa said the allegedly oily locomotive floor had also gone through a daily inspection — which specifically checks for substances like oil on the floor — about three hours before the incident and was cleared for service.

But beyond those factors, Kujawa said, Metra challenged whether Cravatta slipped on oil at all because he didn’t mention slipping on oil when he filed an incident report, notified his supervisor, filled out an official report the next day or initially saw his doctor after the incident. “All he said was he fell — nothing about oil,” he said. Metra also contended Cravatta failed to look out for his own safety in the incident. “It’s common knowledge that when trains operate in the wintertime, they are going to accumulate snow and/or ice while they’re operating outside,” Kujawa said. “There’s just nothing Metra can do about it.” The parties attempted settlement negotiations, Emison said, but they were “very far apart” and couldn’t reach an agreement ahead of their trial that began at the end of February before Circuit Judge Joan E. Powell. The jury awarded Cravatta $2,500 for disfigurement, $3,017,500 for past and future lost earnings, $270,000 for past and future pain and suffering and $2 million for past and future medical expenses. Emison said his client was “very pleased” with the verdict. “This case was about the law and that everybody has to follow the law. That’s what we were arguing from the beginning,” he said. “There were two separate federal safety regulations that Metra violated and we were able to show with the evidence that Metra violated them.” But Kujawa said some evidence shouldn’t have been allowed in trial, and he plans to file a post-trial motion challenging their introduction into the record. “I certainly believe that the admission of evidence of complaints about other locomotives going back as far as 2008 or coach cars that were not involved in this incident was improper,” he said. “I don’t think that evidence should have come in.” Kujawa said his client’s impending motion will also challenge the jury’s damage award for past and future lost wages — the largest award in its verdict. He said Powell allowed that claim to be presented despite a late disclosure from Cravatta of a list of different jobs he’s applied for since the incident. “We’re not done fighting,” Kujawa said.

Other news publications about this case: